It’s been an unusual kind of Monday so far.

For the last few years, I’ve built up the habit of keeping as many of my Mondays to myself as possible. I try to use the start of the week to plan and set myself up for the rest of the week. I am quite a meticulous planner and there are very few hours in my days that are unaccounted for.

Today has been a little different as I took up residency at King Street Studios in Lancaster for the start of my project The Common Kitchen. In a few months, The Common Kitchen will be a book. I want it to be the kind of cookbook that acknowledges the fallacy of single-author cookery titles; one that embraces the collective efforts, the scribbled notes in the margins that make food – and food culture – what it is.

For the next two weeks, I am working on this book using Open Space Technology and inviting different voices in at different points. Do take a look at the programme to find out about opportunities to join us.

Every day of this residency, I will be cooking at least one dish to share with whoever comes, a.k.a the right people. Each lunchtime will be loosely based on a theme, which may become one of the chapters in the book.

Today, I am thinking about leftovers.

Partly, this because I came into this residency with the literal leftovers from having performed The Midnight Soup at the weekend. I am also interested in leftovers more broadly…

Leftovers are both what we leave behind and what is already there.

I came in with peppers. They became a lunch of caramelised peppers and rice in a light dressing of olive oil, thyme and garlic.

I’ll be leaving with the start of a chapter.

Beginning at the end.

I’ll be leaving with caramelised peppers, mixed in with some rice.

It will become an egg fried rice dinner, probably…

See you tomorrow? There will be courgettes! 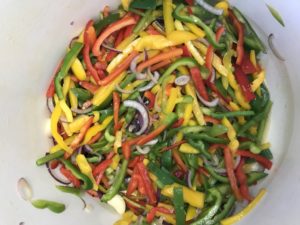