I love how it seems the long gaps in this blog happen at the busiest of times. A kind of quiet in the negative space of my cyber-home which almost always suggests what is actually happening is there has been very little time to sit at a computer and share notes and thoughts outwards (or at least not through this medium!)

Since I last wrote, The Midnight Soup played Edinburgh’s Summerhall during the Festival Fringe where it received a humbling number of star-studded reviews and responses from guests. There was one common theme to people’s response to the piece at the Fringe, which was that it was unusual to have the opportunity to pause and take stock for such a long time (the piece runs at ca. 2.5 hours… not a particularly Fringe friendly format habitually). Putting The Midnight Soup in this frantic context felt like a big risk. I wasn’t sure people would be up for stepping aside into a quiet, reflective and time-consuming space when the FOMO levels run high at the mere thought of all that is on offer.

People did take up the invitation, they did so generously and there was a kind of hunger for what was offered within the space. This was incredibly enriching for me, and it meant that I could come back from Scotland and run at the Autumn with renewed confidence to fuel the making of a new project… with bread 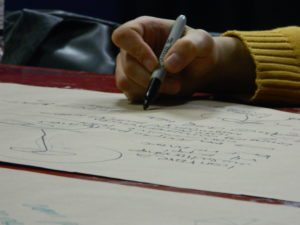 I won’t bore you to death with the details and the ups and downs of making this project, but in brief, the idea for with bread was first sown back in 2014 and its seedling first tried out sometime in late 2016… in other words, this piece is a slow burner, even in its making but this time, it’s for good, it premieres at ARC, Stockton Arts Centre in March 2019. Tickets aren’t quite on sale yet, but do look out for a further announcement.

I am very grateful to ARC for having given a home to the project and its team, as we all gathered in Stockton-On-Tees for the first time as a company of sorts (joining me are Katherina Radeva, Aliki Chapple, Michael Norton and Louise Cross). It’s too early to tell you a lot more about the show than what you can find out from its project page… but what I can tell you is that I left this first week of research of development very full: of ideas, of joy, of love… I trust that if you join us in March, you will also leave very full. 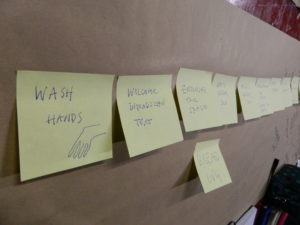 With this fullness, and a spring in my step (and via a quick change of suitcase), I then spent last week all the way up at the northernmost mainland arts centre in the UK, the wonderful Lyth Arts Centre.

There I spent most of my time writing (fleshing out the collective notes, and the post-it note structure pictured above!) weaving together a brief history of bread, journeying and celebrating difference. The view from the writing room was absolutely terrible, as you can imagine… 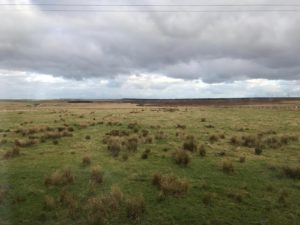 I hope that I might have piqued your curiosity and that you’ll consider joining us in March. This is your own, personal invitation to do so. If you cannot wait until then, you can scratch that itch by joining me at a work in progress sharing which will take place at the Lowry in a double bill with a piece made by a group of second-year students working under my supervision.